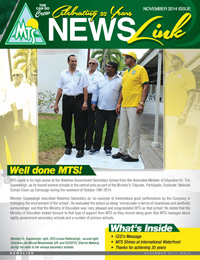 MTS celebrated the achievement of our 35 years milestone with the hosting of an Interfaith Thanksgiving Service in the car park of the MTS Plaza, Aranguez on Thursday 27th November 2014 in celebration of the Company’s 35th Anniversary.

The evening was deemed Blessed and Special as the rains stopped to allow the Company to enjoy this activity which included a gallant display of marching skills by our security operations comprising the elite, judiciary and mainstream units led by DCSO Ronald Steele and Inspector Selwyn Paul.

The marching display gave way to a well-received musical interlude by Ms. Moricia Cagan accompanied by Dwayne O’Connor who set the tone of the programme when they sang ‘Love Changes Everything’ composed by Michael Ball. 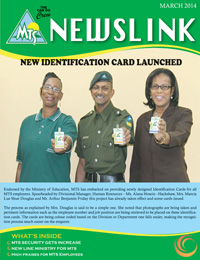 Endorsed by the Ministry of Education, MTS has embarked on providing newly designed Identification Cards for all MTS employees.

The process as explained by Mrs. Douglas is said to be a simple one. She noted that photographs are being taken and pertinent information such as the employee number and job position are being retrieved to be placed on these identification cards.

The cards are being colour coded based on the Division or Department one falls under, making the recognition process much easier on the enquirer. 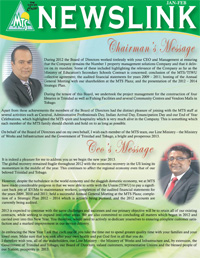